​Rescue Mediums TV Show
I have been asked many times how I got involved with Rescue Mediums, and the way it happened still astounds me.  Family history is the answer, would you believe!   I am now truly convinced that my ancestors and guides have had more than a hand in the whole thing.  In researching my family history, I became acquainted with a family member who I didnt know existed until I discovered that we were both researching the same family, but from completely different angles.   Jean had emigrated to Canada in the 1970's and was trying to fill in the missing branches to her tree, just as I was.  I carried on the research in England whilst she concentrated on the family in Canada.  Jean traced our Gt Uncle to a home in Toronto,  whose resident was Micheal Lamport (who is now one of the show's producers).  Contacting Michael, he agreed to help with the research by visiting the Toronto Archives.  He found some information about the house and and during a telephone conversation Jean mentioned that she had a 'cousin' in England who was a psychic and had recently been on the tv there and in the media in connection with a police cold case file.   Jean knew that Michael was involved with several tv shows and indicated that it may be a good idea for him to contact me to see if a documentary could be made about my psychic abilities.

6 months down the line, Michael kept recalling the conversation, it began to play on his mind, but didnt know why.    Both Micheal and I now believe it was my Gt Uncle prompting him to call me.  The series of events following were quite amazing as Michael and his business partner Gregory Sheppard (the other Producer of the show) flew over to England to meet myself and my sister in law, Christine Hamlett, who I did spirit rescue work with.  We discovered that my Gt Uncle Oliver Hamlett, had actually built the house that Michael now lived in.  In fact Oliver and his wife Perdita had their whole family living there with them!

Michael and Gregory filmed a demo of us working at the Moon Hotel in Derby where a troublesome spirit was causing all sorts of problems for the owner.  Taking the film footage back to Canada, we were all thrilled when W Network loved the idea behind the show and firstly commissioned a pilot, which was quickly followed by a Series, and so Rescue Mediums was born.

What is so wonderful is that I have been to stay at Michaels house on many occasions since our first visit there in 2005, and my Gt Uncle Oliver and Perdita are still visiting the house, and are more than happy for Michael to be living there.
I love being there, it feels like home to me, and Uncle Oliver always makes me feel welcome.   As if to confirm that Uncle Oliver is happy for Michael to be in the house, a couple of years ago, Michael was having some renovations,
​and taking down a dividing wall was excited to discover old newspapers dated 1917 that can only have been placed there by Oliver !

Rescue Mediums is a half-hour factual entertainment TV series that delves into the paranormal. Seen in 28 countries around the world, it is now also showing throughout Europe.  The show follows the investigations into various hauntings by two world-renowned psychic mediums, now known as the "psychics who make house calls". In Seasons 1, 2, and 3, the mediums are Jackie Dennison and Christine Hamlett. Seasons 4, 5, 6, and 7 are hosted by Jackie Dennison and Alison Wynne-Ryder. The mediums seek ghosts in houses and businesses big and small and the results are often very scary! Fascinating and frightening is how our viewers describe the show. 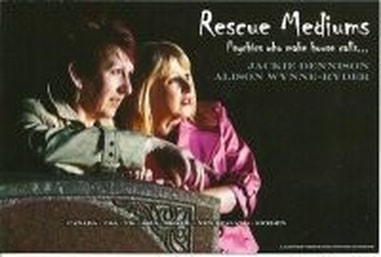 Seasons 1, 2, 3 feature Jackie Dennison & Christine Hamlett
Due to changes in British Law, We have to state that Clairvoyant readings at Feathers, via mail or in person, are for entertainment purposes only.
Copyright ; The entire content of this website belongs to Jackie Dennison. You must not copy, distribute, or publish any material contained within any of the site without written permission.